This photo was taken at the Artists Paint Pots in Yellowstone. These are a group of hot springs and mudpots. Mudpots have no direct connection to underground water but steam and hydrogen sulfide gas bubble through the ground. Microorganisms breakdown the underlying rock, which produces the “mud.” Minerals in the rock contribute to the various colors seen. 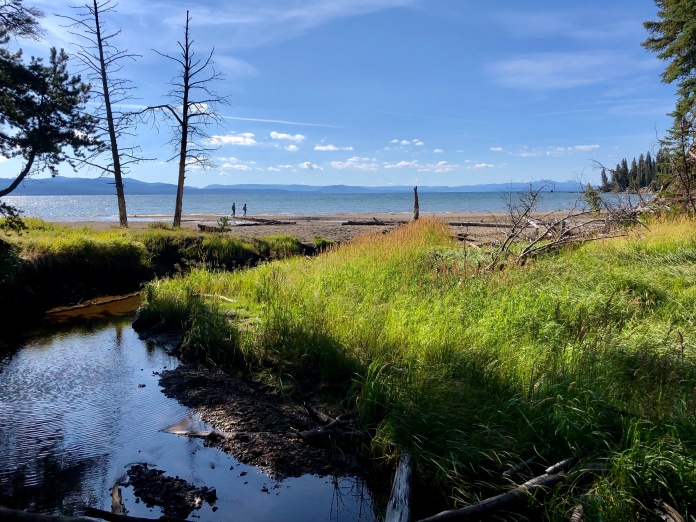 For various reasons, the word that comes to mind when I look at this photo is “peaceful.” I realized long ago that being near the ocean or other large body of water gave me a feeling of peace. The sun and mild breeze add to the peaceful feeling. Peace is so much more than the absence of conflict (worldly peace).

Peace I leave with you; my peace I give to you. Not as the world gives do I give it to you. Do not let your hearts be troubled or afraid. 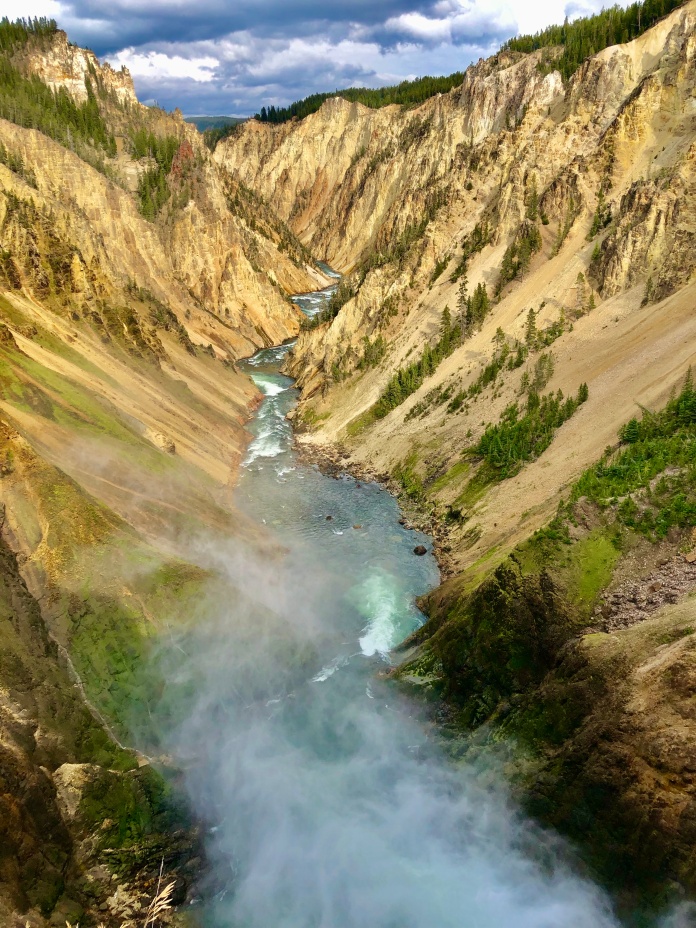 This is a photo of the Yellowstone River, taken from the top of the lower falls. That mist at the bottom of the photo is coming from the falls. The name, Yellowstone, was from the Hidatsa name which was translated as Yellow Rock River. It is not certain what the origin of this name was but it seems possible that it is related to the color of the rock in the Grand Canyon as seen in this photo.

God is identified as “Yahweh” in the Bible, usually translated as “LORD” in English. Yahweh is actually pronunciation of the Hebrew for “I am.” A simple name with deep meaning. God is and was and always will be. The source of all that exists. Even yellow rock.

This is a photo from the second time we visited the Grand Prismatic Spring. Quite a different view compared to our first visit 2 days earlier. The first day we were there, it was cold and drizzly. It was hard to see much of the water because there was so much steam rising. And with very little sun, the predominant color was grey. (Is grey a color?) The second visit, there was much less visible stream rising and the contrast in colors was striking.

I’m sure we have all had the experience of not “seeing” what if right before us the first time we encounter it. There are many instances in the New Testament that refer to individuals being prevented from seeing (understanding) what was happening. For me, this is another way to think about “perspective.”

This was a view from near the top of amount Washburn in Yellowstone. The Grand Canyon is seen crossing in the center of the photo with Yellowstone Lake behind it. In the distance, you can see the mountains where the Yellowstone River begins. It was literally breathtaking, but some of that may have been due to the hike to over 10,000 feet.

It’s an incredible feeling, having such a vantage point. Very different than what you would see from an airplane. In fact, we flew directly over Yellowstone as we were traveling home. From far away, such on a plane, everything looks very two dimensional. 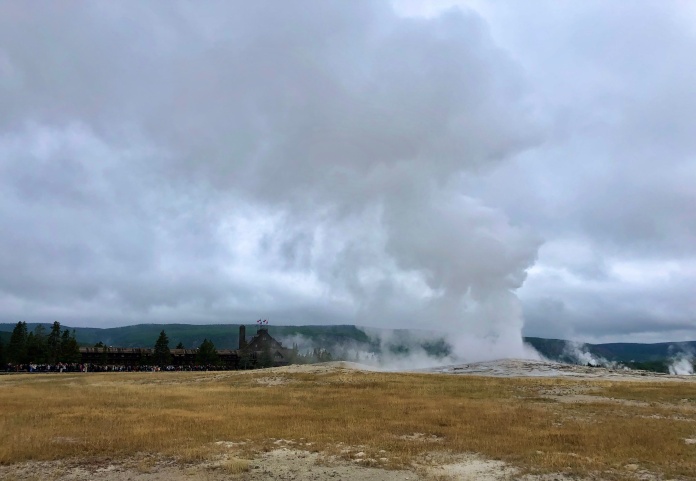 Eruptions can shoot water as high as 185 feet; water temperature at the surface has been measured at 204°F with a steam temperature greater than 350°F.

I hardly need to point out that we have a faithful God.

This photo was taken during a hike in Lamar Valley in Yellowstone. Even though it was a fairly short hike, it was one of our favorite hikes because of the animals we saw. Just before we started the hike, there was a large herd of bison that crossed our trail. We waited a few minutes to make sure they were well clear of us.

Shortly after starting the hike, I saw some movement in the distance but could not quite make out what I was seeing. Once we went up a small hill, we could see 3 or 4 pronghorn sheep running through the brush. Just a little further ahead, we saw this one by itself.

Easy to see why many call this God’s Country. 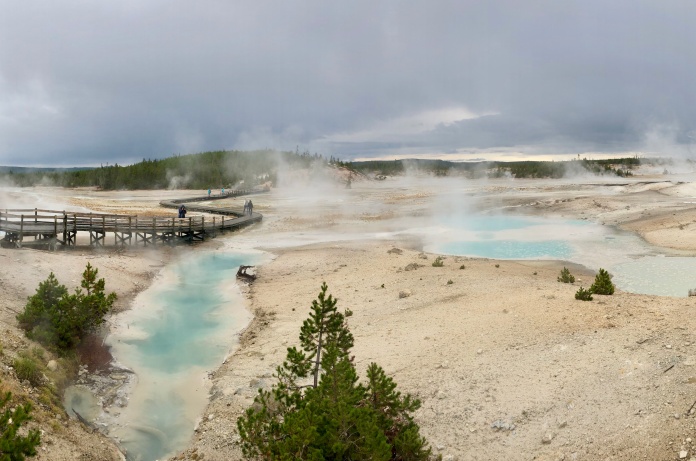 This photo was taken at the Norris Geyer Basin at Yellowstone. It is almost bizarre looking with the steam rising, the unusual colors and hissing sounds, not to mention the string sulfur odor. The word that comes to mind is “otherworldly.”

This morning, we will be celebrating the life of Father Dave, who passed on last week. And we remember that this world is not our home.

This photo of the Lower Falls of the Yellowstone River was taken from a spot called “Artist Point.” It was originally named in 1883 by Frank Jay Haynes (official photographer of Yellowstone NP) who mistakenly believed that the point was where Thomas Moran painted his famous 1872 depiction of the falls. The original painting is displayed in the Smithsonian Museum. It has been determined that the view was from the north rim. However, I am sure many artists have painted the falls from this point, so it is still a good name.

I mistakenly thought we would be able to see both the Upper and Lower Falls from this spot. I was disappointed to find out there was nowhere you could see both falls at the same time.

How often are we disappointed with God’s blessings?