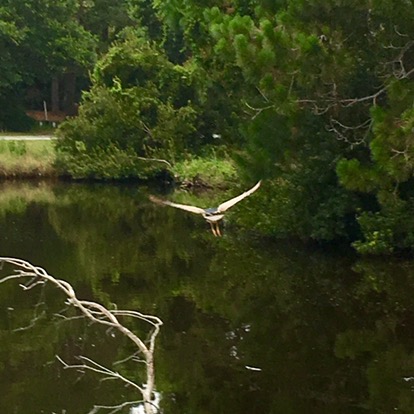 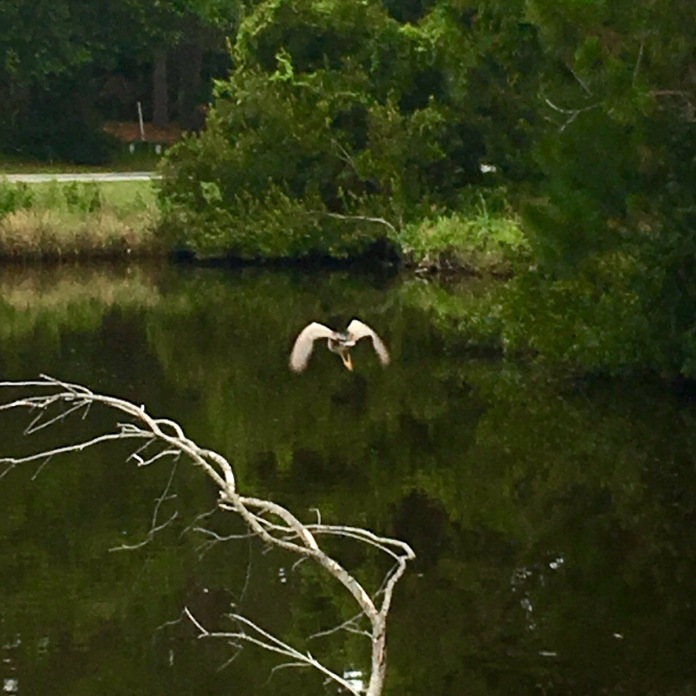 Marylynn and I came to these statues in Palas de Rei and couldn’t resist the photo opportunity.

When I was reviewing pictures and came to this one, I thought of a reflection Marylynn wrote for Ite Missa Est (our Parish Faith Formation website) based on Psalm 139:5 “Behind and before you encircle me and rest your hand upon me.” She compared how God often leads us in a way similar to how one partner silently leads the other in dance. With a “slight touch” which requires us to be able to respond to that touch.

May we be open to and respond to God’s hand upon us. 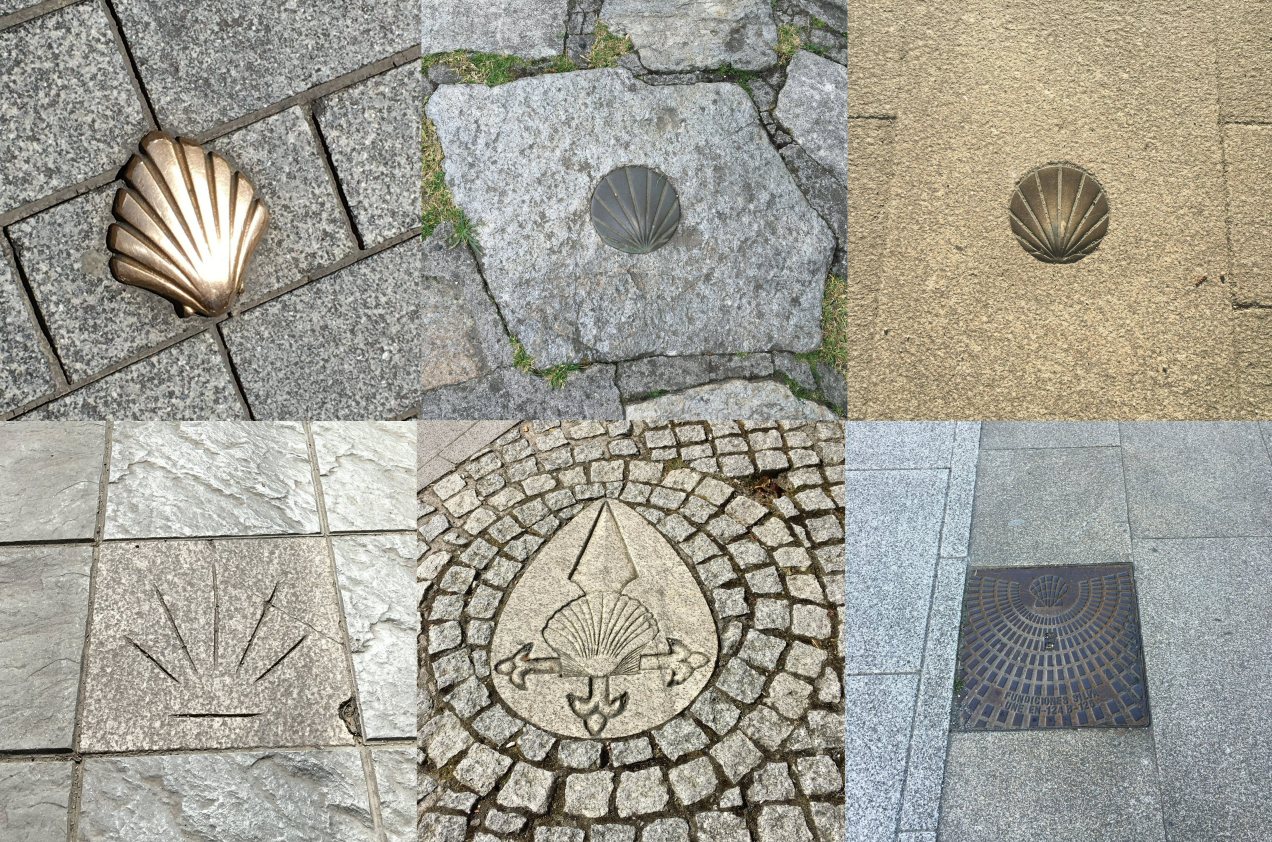 To say that we saw a lot of scallop shells would be a vast understatement. As I mentioned, the yellow arrow and scallop shell are the main markers along the Camino.

Shells seen in the sidewalks along the Camino

I have previously posted some of the markers that had an arrow and shell:

These were the largest shells I saw: 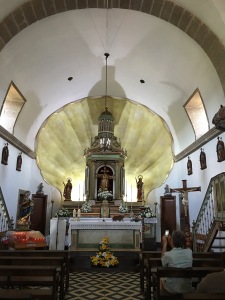 We saw shell tiles for sale and shells used as home decorations; we each carried shells on our packs.

Marylynn’s backpack the night before we started our hike

The following is from Caminoways.com

There are many stories that try to explain the link between the scallop shell and the Camino. The lines of the scallop shell are said to represent the different routes pilgrims travel from throughout Europe (and Asia), all walking trails leading to the tomb of Saint James in Santiago de Compostela.

Medieval pilgrims often wore a scallop shell attached to their cloaks or hats during their journey to Santiago. More than being just a symbol or a pilgrim badge, the scallop shells also had a practical purpose: they were a handy and light replacement for a bowl so the pilgrims could use them to hold their food and drink on their long journey. Pilgrims would also be given food at churches and other establishments, and a scallop shell scoop was the measure for the food they would be donated.

Since the scallop is native to the coast of Galicia, the shell also became a memento, a physical proof of having completed the pilgrimage to Santiago, which often included the walk to Fisterra (the “End of the Earth”). The shells could be picked up at the very end of the journey in Fisterra but also became a popular souvenir and source of business for the shops near the Cathedral in Santiago.

In her book, “Walk in a Relaxed Manner”, Joyce Rupp talks about the shells (and arrows) as symbolic of various activities in our lives that keep us in the Now. Father Michael compared the shells to the helping hands (that we should accept) as we go along our “way.”

For me, the shells are symbolic of God’s presence in our lives. Sometimes God is very obvious; sometimes we can pass right by without even recognizing God. Sometimes God is providing direction; at other times help in a time of need.

As I looked through my pictures, I found several where there was something obvious near me and something in the distance. 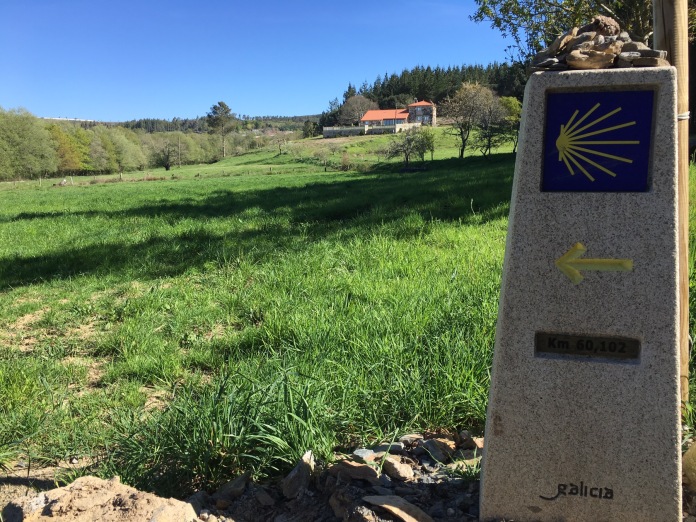 Marker in foreground, house in the distance 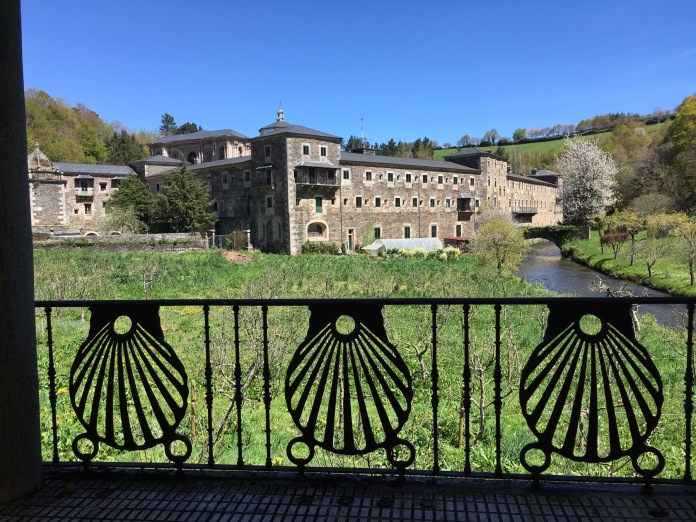 Railing in foreground, monastery in the distance 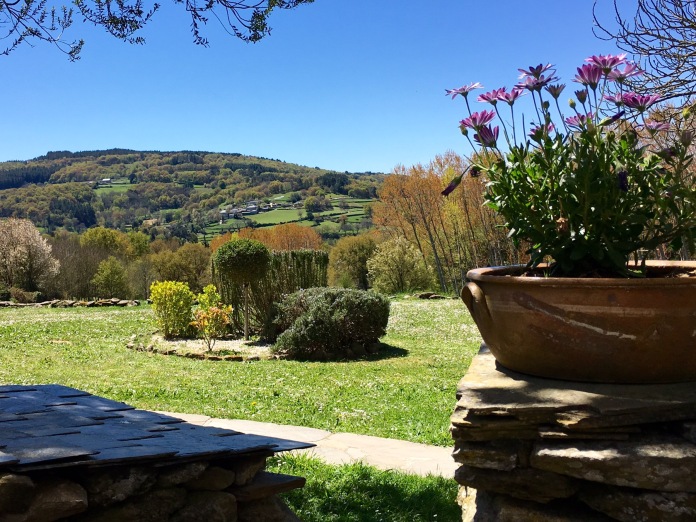 Flowers in foreground, hill in the distance

There is probably some artistic term for composing a picture this way. What strikes me is how much attention my eye gives to the closer object, even though in each case it is actually smaller/less significant.

There is a clear analogy that can be made to things in our lives. When something is close, in location or time, it seems more important compared to “far off” things. Not saying this is necessarily a bad thing, just something we should be aware of.
As I reflected further on this topic, it struck me how fortunate we are that God is everywhere (in time and place) and nothing is “far off” in God’s eyes. 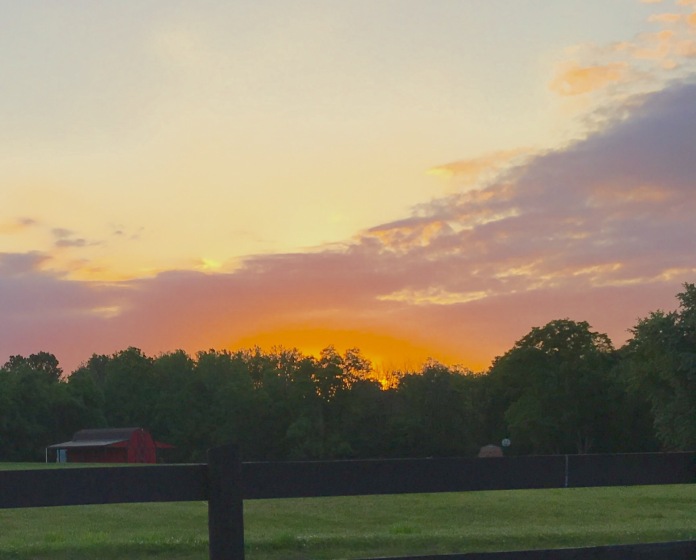 Driving to work a different way this week and was treated to this view.

I mentioned that on our fourth day of hiking, we had to choose between the shorter, more direct route or a longer route which went through Samos. In Samos, there is a monastery which was founded in the sixth century.

If I understood our guide, part of the structure dates to the 12th century. We had high expectations of the visit and were not disappointed. 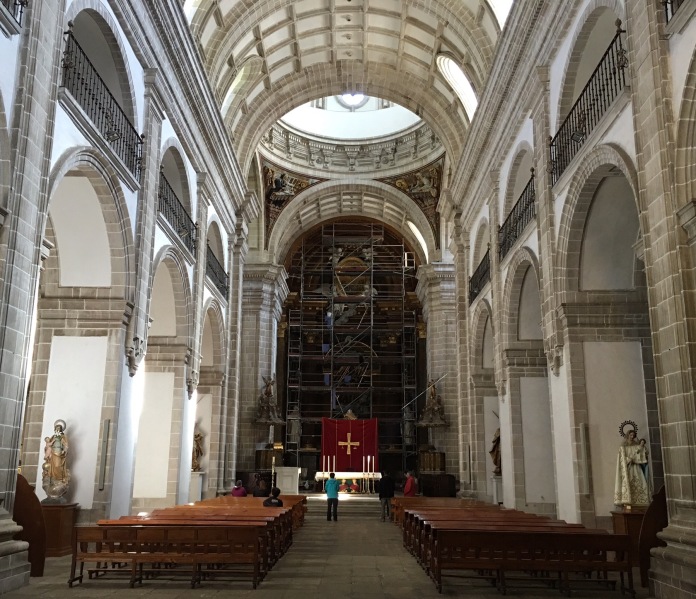 Inside the church at the monastery

The pleasant surprise was how beautiful the views were this day. We were told the other route had wonderful views and assumed the route through Samos did not. In fact, the views were some of the best of the trip. 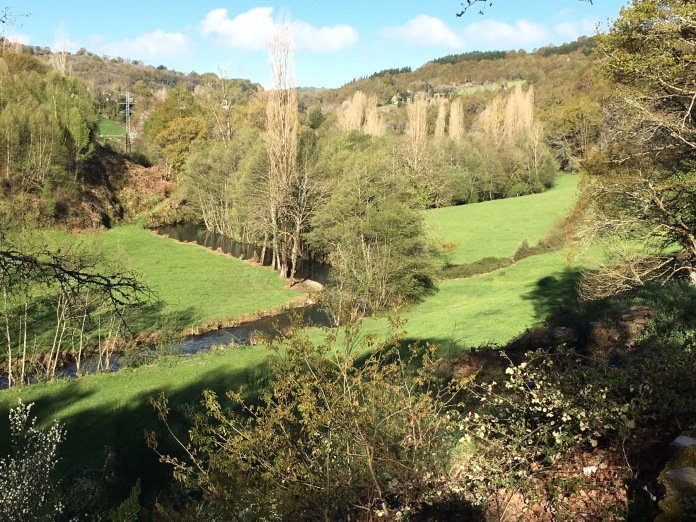 We hiked along the Rio Oribio, then the Rio Sarria the whole day. The walk was even more pleasant due to the fact that most peregrinos take the other route, so we felt like we had the coutryside to ourselves.

How often do we have low or negative expectations based on no information or bad information?

Marylynn and I have a couple of bird feeders right outside the window by our dinner table. We have been seeing this Bluejay with some regularity; I took this picture about a week ago. We love watching the birds. Not only are they beautiful, but their behavior is very entertaining. 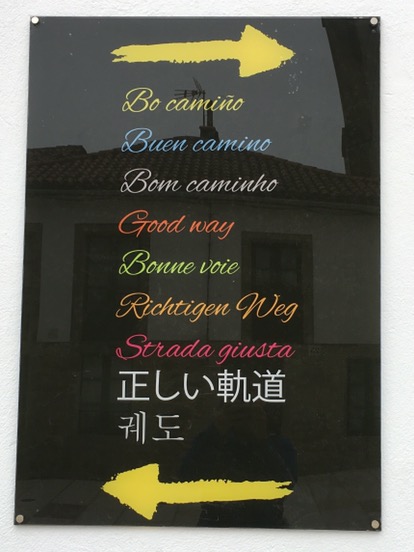 I previously mentioned that Jeffrey, from Fresco Tours, gave an overview of what to expect on the Camino. Along with describing the various route markers we would see, he explained that there would be times that we would see arrows pointing more than one direction (i.e. left and right). 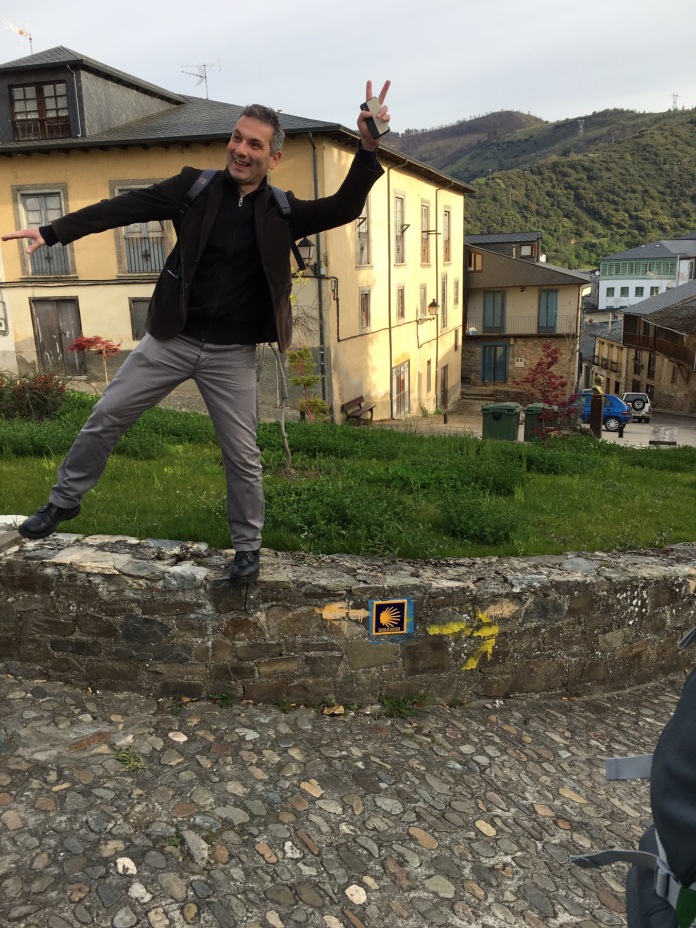 These spots were usually in towns and meant that you could go either direction through the town. Unless someone had added an arrow to get you to their business…

There were a couple of spots with an important decision to made made regarding which direction to go. The first (for us) was leaving Triacastela, shown below.

Someone obviously thought “Por San Xil” was the path to take

We read about this choice days ahead. To the right was the shorter path and “more scenic”. To the left, through Samos, was longer but allowed visiting a Benedictine monastery founded in the 6th century. Marylynn and I went to the left. More about this choice in a future blog.

The other notable choice was as we approached Portomarin. Unfortunately, I did not get a picture that includes an arrow pointing both directions here. I did take a picture of Father Michael reading the sign describing the “highly difficult pedestrian section.”

I guess we didn’t fully appreciate the difficulty of the section ahead until we we actually started down the steepest section. Pictures never really prepare you for the actual experience.

Steep section, made more difficult by the 17 miles or so of hiking that preceded it

The picture below was an unexpected option. One of our “rules” to follow was that in these situations, a newly painted arrow was more likely to be the one pointing off the Camino to someone’s business.

In this case, both seemed old and “reliable.” We decided the path to the right was really to the albergue (hostel) and was not what we wanted though we probably would have been ok either way. 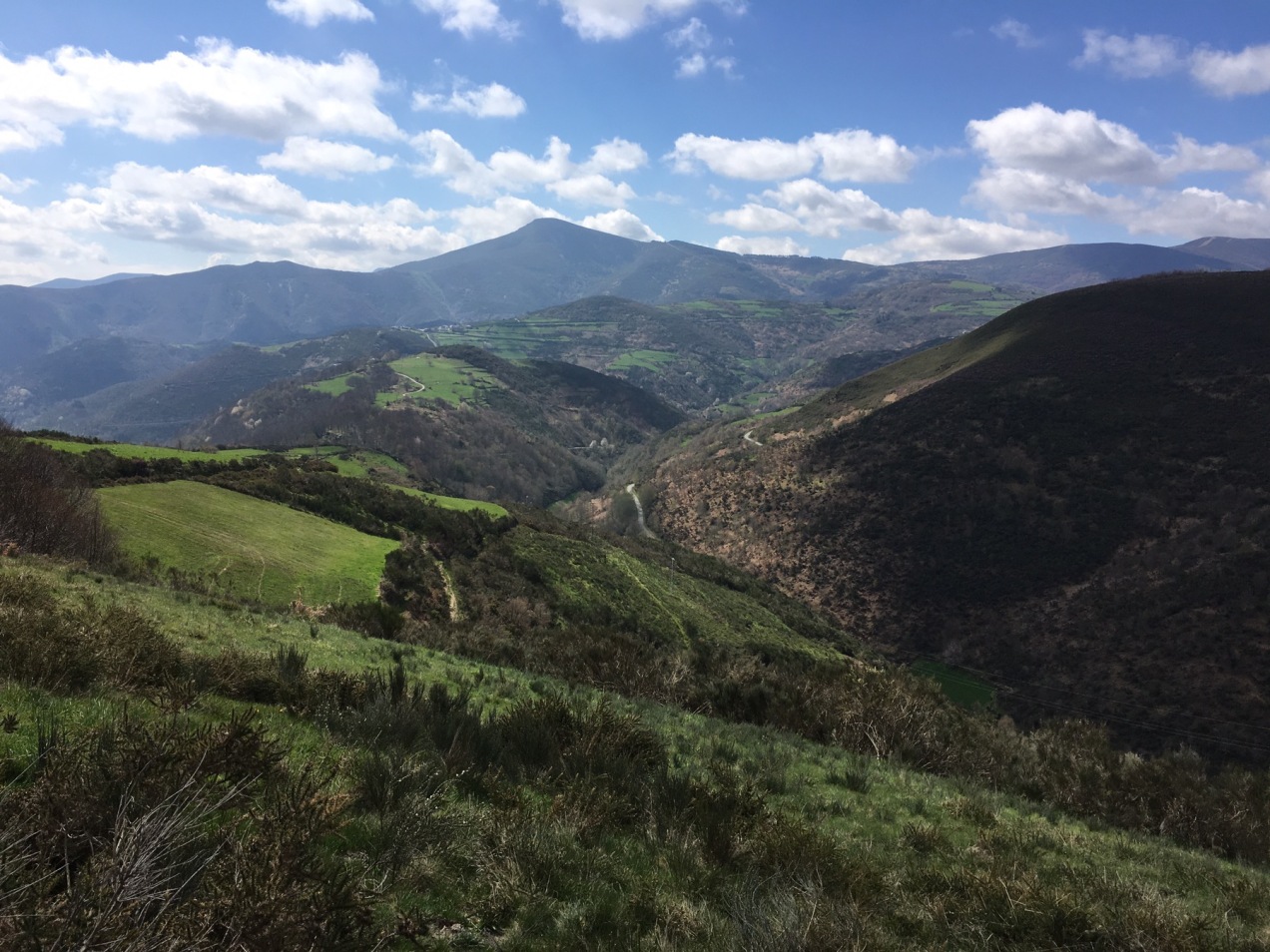 Our second day of hiking was going to be our hardest day. That’s what we were told before we began. We would “only” be hiking about 8 miles, but would would be climbing from an elevation of about 550 m to 1300 m. After a short section on road, we veered to the left to begin a long climb on some of the more technical (rough) trail we used.

No shortage of rocks to walk on!

As we quickly discovered, one of the benefits of this climb was a series of stunning views. Not sure these pictures begin to capture the actual views.

The lowest spot you can see is about where we started our climb.

This about the highest spot we reached on this day. We spent the night in O Cebreiro.

It seems rather obvious to compare climbing hills/mountains and enjoying the view from the top to overcoming obstacles in our lives and resulting perspectives that we gain from the experience. But I said it anyway.